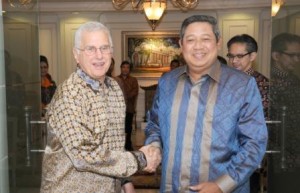 President Obama announced the U.S. Science Envoy program to Muslim-majority countries in June 2009, to “demonstrate the United States’ commitment to science, technology, and innovation as tools of diplomacy and economic growth.” Dr. Alberts was appointed shortly there after as one of the first three Envoys, and took his first of many trips to Indonesia in May 2010, with a focus on

Read Dr. Alberts’ thoughts on his experience in My Life as a Science Envoy.

After the official term ended in 2011, this envoy work has continued, culminating in the creation of the Indonesian Science Fund in 2016. In 2015, Dr. Alberts participated in the Zakri Task Force on Science at Universities in the Muslim World, convened by the Muslim World Science Initiative to assess the present state and recommend improvements in the scientific education and research in Muslim majority nations. See here his contribution to the task force, entitled: Science education in the United States: Some Lessons Learned.

About the US Science Envoy Program